noun :a position or place that allows one a wide or favourable overall view of a scene or situation

Custard Cottage is a great vantage point from which to view the circle of bird life and we feel so privileged to be able to witness the comings and goings of new babies every year.  It’s not without sad moments though; last year a lone young guinea fowl Mom, started bringing her 4 little fluff ball chicks into our garden, we were delighted to see these gorgeous little creatures but our delight soon turned to horror as we noticed their number begin to dwindle as the weeks wore on, my guess is the local cats discovered where her nest was and were helping themselves to her babies.  Eventually she was down to only one chick when thankfully, a large flock of guinea fowl allowed her to join their group, thus ensuring the little one’s safety.  We were so relieved to be able to watch him grow into a gangly teenager and then a young adult.

Most of the wild birds stay outside in the garden or on the deck, with the occasional cheeky drongo flying into the kitchen looking for cheese or a misguided turtle dove getting stuck in the fanlight over the french doors.  This year however, a pair of wagtails decided that the quickest way to get tidbits of cheese to supplement their diet of insects and the like, was to come directly into the house and onto the kitchen counter. We soon began to notice that they would only eat one piece of cheese and fly away with another piece held in the beak, at first we thought they were perhaps feeding a baby cuckoo (which is what happened last year), but soon discovered they were feeding twin baby wagtails.

In the image above an adult wagtail loads up with cheese to take to the nest to feed the young ones. 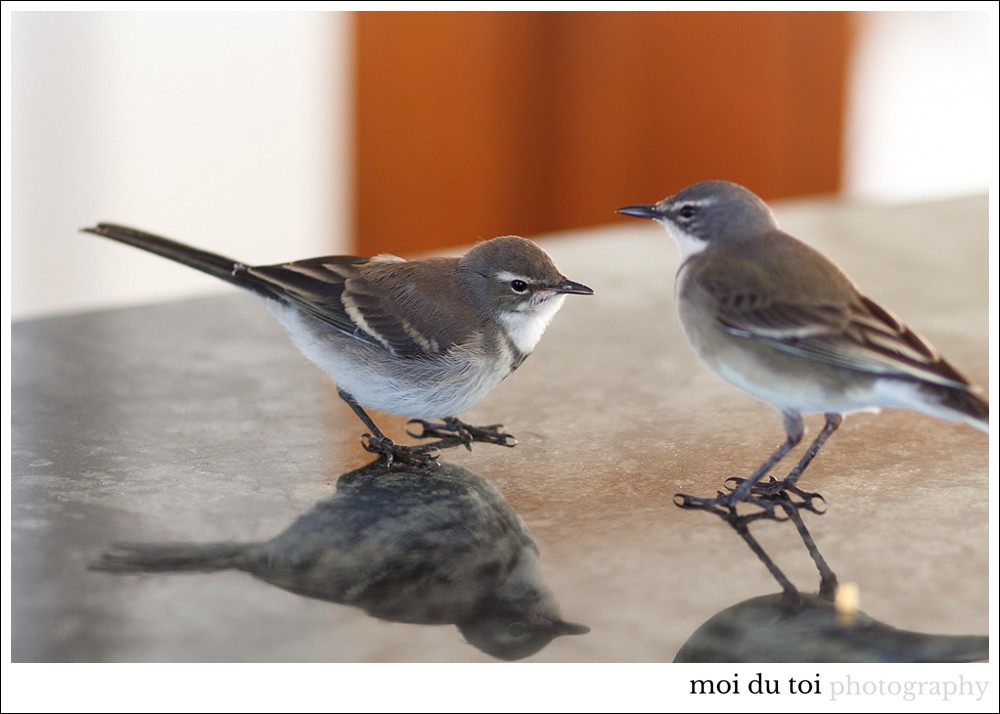 What a pleasure it is to watch these enchanting birds raise their young.

It’s taken me about a week to capture my favourite images of these petite winged ones, it’s all about timing and light.  I soon learned to keep my camera ready, lens cap off and basic settings dialed in.  I knew I needed a reasonably fast shutter speed to freeze the motion of the parent feeding the tiny one but at the same time I was battling an indoor low light situation and in order to have enough light to get good exposures, I was forced to open up the aperture to f2.0 and f2.2, which resulted in a very shallow depth of field.

Once I’d maxed out the aperture and shutter speed the only other way to get more light into the lens was to risk incorporating grain into my photographs by bumping up the ISO to between ISO800 and ISO1250,  as a rule I generally try not to go higher than ISO400!

I was having hard time focusing on the birds because of their quick movements so I switched from ONE SHOT to AI SERVO and used back button focus to keep the lens constantly focusing on the movement.

Photography is always about choices, a photographer will do whatever they have to, to realise their artistic vision for the images, even if that means crawling around on the floor in pajamas, abandoning that first sip of morning cappuccino in order to crouch down in an uncomfortable position for an interminable period with the camera eye piece jammed against the eyebrow just waiting for that decisive moment to press the shutter.

If you own a DSLR and would love to learn take photos like these and use your camera to it’s full potential, my easy-peasy photography course is the perfect place to begin.

These audacious babies are forever exploring Custard Cottage, sitting on cushions, wandering around the floor, landing on the entrance hall table, one even sat on my head yesterday!

So sweet the way they stick their little bums in the air while waiting for Mummy or Daddy to shove some food in that wide open beak.  My photographs may give the impression that the young ones only eat cheese but rest assured the parents work from sunrise to sunset feeding them a variety of worms and insects as well.

What I saw was just one eye
In the dawn as I was going:
A bird can carry all the sky
In that little button glowing.

Never in my life I went
So deep into the firmament.”

Whenever possible, be mindful,

“Don’t be afraid to show the real you to the world. People like authenticity. It is at the heart of all success.”
“Daughters always revel in their mothers admiration. And daughters always bask in their fathers love.”⁠
Miles Morales: "When will I know I'm ready?⁠
Sorry guys I know I've been neglecting my IG and FB but I have an exciting excuse! I've been busy leveling up my photography skills with a fabulous 6 week long intense photography course with #chelseanicolephoto - the best photography mentor EVER!⁠
What a perfect way to end the holiday season photoshoots! A dream couple to work with and the location wasn't half bad either!⁠
“Let us be grateful to the people who make us happy; they are the charming gardeners who make our souls blossom.”⁠
PHOTOSHOOT TIP FOR PARENTS - For a happier, tantrum free child (like the one in this photograph) stay away from sugary food and drink on the day of your photo session. Especially during the session, stick to healthy, sugarless snacks like grapes, nuts, hard cheese, or a savoury biscuit. To drink? Water actually works best.⁠
“In daylight and up close, he was merciless, all smiles and freckles, the brightest, boldest flame a moth could wish for.” ― Alexis Hall⁠
When I capture a moment like this, with Ouma looking at her granddaughter with so much love, I wonder is it because she feels an intensely deep soul connection to this blood of her blood, her baby's baby? Or because it feels like she's dipping her toe into a second chance at motherhood, or is it a little bit of both?⁠