Let us be like a bird for a moment perched
On a frail branch when he sings;
Though he feels it bend, yet he sings his song,
Knowing that he has wings.”

I dedicate this post to my dear friend Tess, who fell in love with these delightful birds when visiting Custard Cottage all the way from Devon a few weeks back.

It is a rare and wondrous thing to have a wild bird swoop down and settle on one’s hand.  For me it’s an everyday occurrence but still a wondrous thing nonetheless.

Morning and late afternoon I throw wild-bird seed on the grass and in the bird-feeder for the turtle-doves, weavers and the fat speckled pigeon that likes to sit on our roof.  Our other special visitors are the cheese loving, whisker sporting, fork tailed drongos. 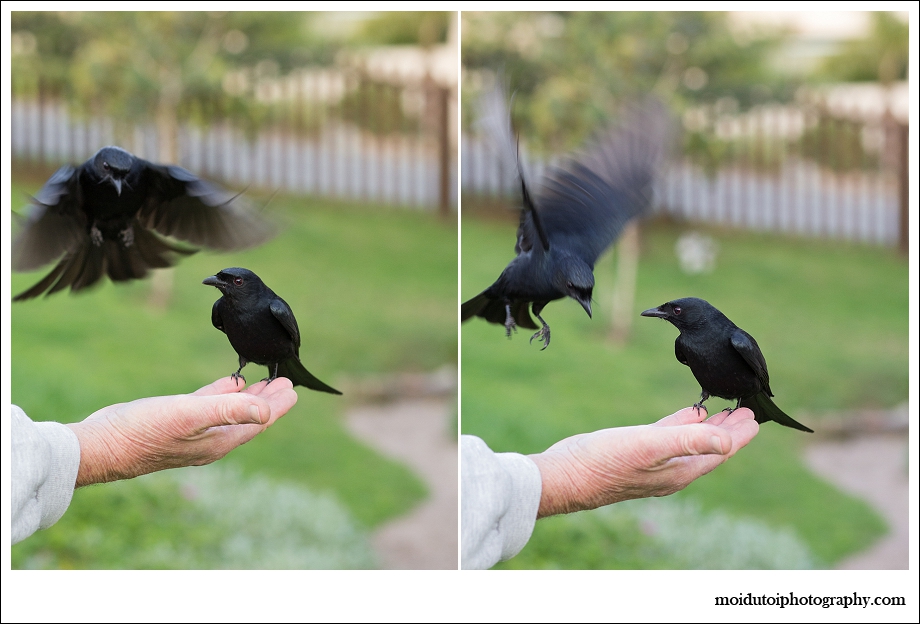 It is not unusual for me to come out and find sometimes up to four and twenty black birds perched on my roof waiting for their cheese. 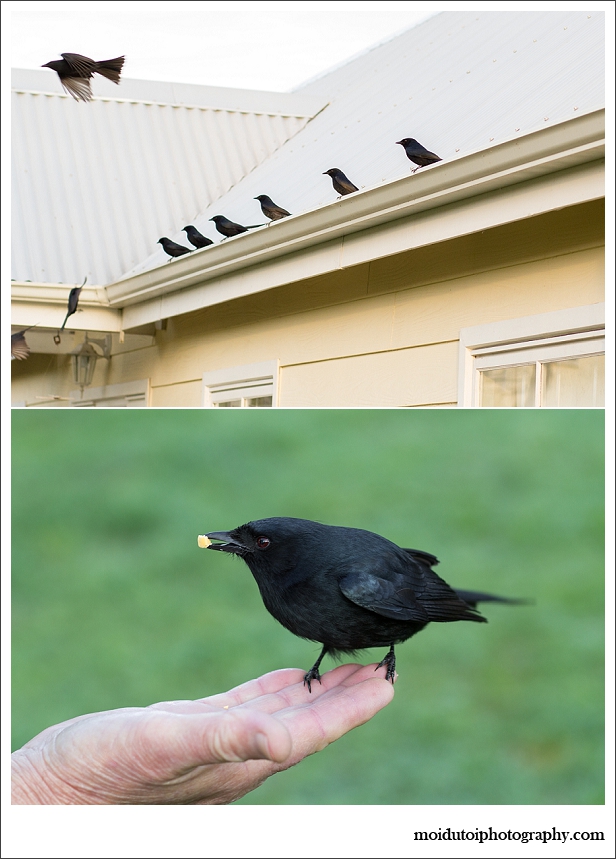 The Roberts Bird Guide says that the drongo is a black bird with a deeply forked tail, robust bill and red eye approximately 25cm and weighing 44 grams.  In flight the wings are pale and translucent.  They are feisty little birds that have been known to mob large raptors and are aggressive towards other large bird species, like the crow. The male and female look very similar to each other, with the males feathers being a bit more glossy than the female.

The juveniles are dark grey below with buff and grey tipped feathers.

The drongo lives mainly on insects (especially bees) mostly caught in flight, it also eat ticks off cattle, grubs and termites.  The call is a loud repetitive twik and a jumble of “unoiled wagon wheel” creaks and rasping noises. These clever little creatures are able to mimic other bird calls and often sound a false alarm when an animal like a meerkat finds food, as soon as the unsuspecting meerkat flees the scene, thinking that a predator is about to pounce, the drongo swoops down and steals the food.

They are able to hover in place like hummingbirds and are adept a catching bits of cheese tossed into the air, in the image below you can see this drongos cute little “whiskers” very clearly.

I feel very privileged to live in a place so close to nature with this abundance of wildlife,  I’m just not so keen on getting up close and personal with a boomslang or a puff adder though! 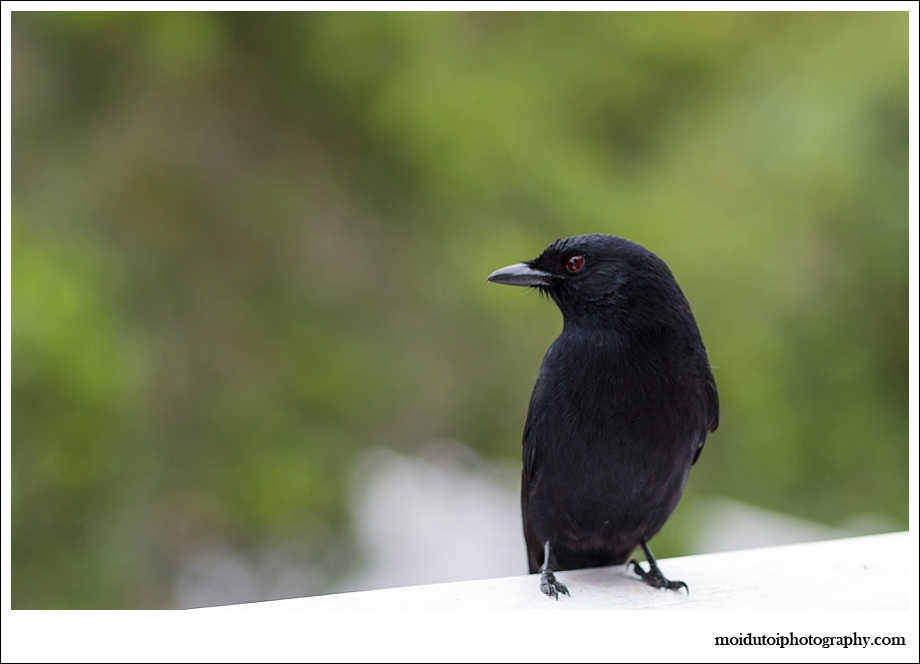 This has been South Africa's coldest winter in 10 years but when a client loves your work and comes all the way from the Free State (800km inland) for family beach session, you simply HAVE to make it happen.⁠
“There is much we can learn from a friend who happens to be a horse.” ― Aleksandra Layland⁠
Children are wonderful. You just give them an activity to do and they take it from there, no micro managing or micro posing.⁠
The upside of driving home after a fabulous family session is witnessing the remains of the day and a silhouette of the beautiful Outeniqua mountains.
It's never too late! The advantages older women have when starting a new business, project, or simply learning something new are:⁠
Cats be like, "We invented napping human, ever heard of cat napping?" - Guilt isn't in cat vocabulary. They never suffer remorse for eating too much, sleeping too long or hogging the warmest cushion in the house. They welcome every pleasurable moment as it unravels and savour it to the full until a butterfly or falling leaf diverts their attention. They don't waste energy counting the number of calories they've consumed or the hours they've frittered away sunbathing.⁠
Fresh post on the blog. CLICK THE LINK IN MY BIO PROFILE TO CHECK IT OUT. Don't know how to get there? Easy peasy, click top left on my name moidutoiphoto⁠ and it'll take you there. Love you guys xxx⁠
When building your brand identity it's of paramount importance that your visual identity in the media portrays the very essence of you and your company. Good brand photography is a fantastic way of allowing your target market to connect with you emotionally. ⁠
New post fresh off the blog, link in my profile⁠