“Sick as a dog” was one of my mother’s favourite sayings, some of the others were, “I didn’t know him from a bar of soap” and “You’ll be laughing on the other side of your face” and so on, she had an arsenal of sayings but I digress, last week my canine children were sick, sick as dogs.  Paddington has taken to eating anything he can find on the beach, tiny mussels growing on the rocks, bits of washed up crab and weird-looking sea creatures to name a few, Ruby joins in too but she’s nowhere near as bad as Paddy for eating garbage.

The whole saga began with Paddington and a heavy dose of diarrhoea.  After a particularly bad night consisting of no sleep but just letting the poor dog in and out of the house every two hours to poop we carted him off to the vet and returned home with a bag full of pills and an empty wallet.  We were no sooner home when Ruby started but she bumped it up a notch by adding vomiting to the symptoms.  Another sleepless night, with the wind howling outside and the rain lashing down, it was no fun standing freezing at the back door every couple of hours waiting for the patients to finish their business in the garden and come back inside.  The final crunch came at 2 am when I heard the telltale heaving sounds of impending retching coming from the kitchen.  I dived out of bed, dashed into the kitchen flipped on the light, oops no light, the power was off!  I bravely made my way to the back door in my besocked feet (don’t judge me, it’s cold at night!) and halfway there I stood in a pile of something wet and slimy, ugh!  This was bad enough but not knowing what end of the dog it had come from made it just that teeny bit worse, I shifted the weight from the ball of my foot to the heel and half limped to the back door and Ruby hurled herself out into the rainy night.

One day I may look back and laugh about that night, fumbling around in the dark during a storm trying to avoid standing in dog puke and having to towel dry wet dogs whilst using my cellphone as a torch, but I’m not ready to laugh about it just yet.

The dogs are both fine now after a week of pampering, special food and antibiotics and happily, I have caught up on my sleep. 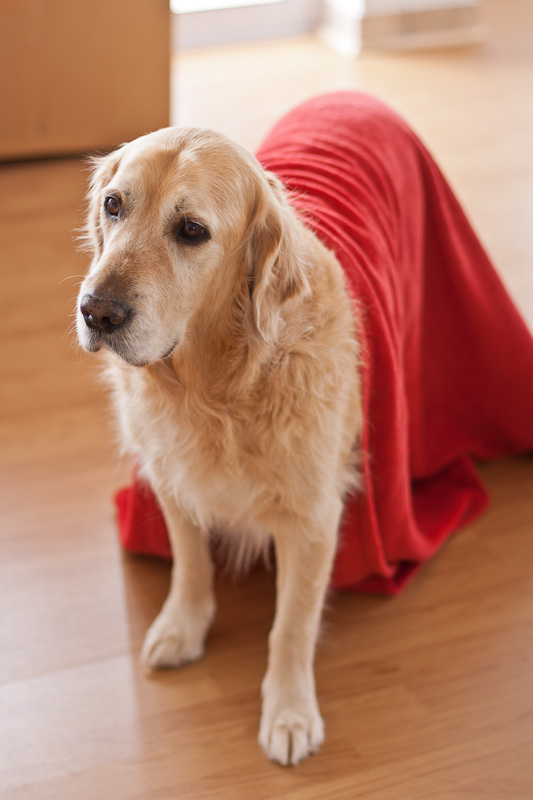 Superdog feeling better and dragging his cape around

This little girl is laughing because of something I said and that's EXACTLY what I'm after. One of my goals during a family photo shoot is to have images that FEEL carefree and joyful. I'm looking for natural smiles that come straight from the heart.⁠
Photographing large groups of peeps can be challenging but it can also be fun! This particular group of ladies were over the top determined to have a rocking GOOD TIME!⁠
I see this EVERY SINGLE TIME I do a family shoot and one of the older siblings is a girl. The older sister is always wanting to take care of the "baby".⁠
This has been South Africa's coldest winter in 10 years but when a client loves your work and comes all the way from the Free State (800km inland) for family beach session, you simply HAVE to make it happen.⁠
“There is much we can learn from a friend who happens to be a horse.” ― Aleksandra Layland⁠
Children are wonderful. You just give them an activity to do and they take it from there, no micro managing or micro posing.⁠
The upside of driving home after a fabulous family session is witnessing the remains of the day and a silhouette of the beautiful Outeniqua mountains.
It's never too late! The advantages older women have when starting a new business, project, or simply learning something new are:⁠
Cats be like, "We invented napping human, ever heard of cat napping?" - Guilt isn't in cat vocabulary. They never suffer remorse for eating too much, sleeping too long or hogging the warmest cushion in the house. They welcome every pleasurable moment as it unravels and savour it to the full until a butterfly or falling leaf diverts their attention. They don't waste energy counting the number of calories they've consumed or the hours they've frittered away sunbathing.⁠